The Kingdom of Heaven is like an old house, filled with all of your most precious childhood memories. Except, you have amnesia.

You are walking down what to you is just another street, filled with other people’s houses, other people’s lives, wondering about your own. But this one house…this one house seems to call to you. As you look at it, your heart warms, and you are drawn to the front door, which seems to open at your lightest touch. 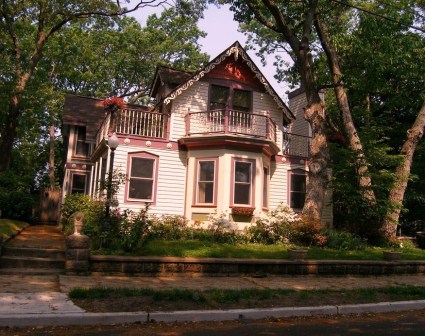 The walls carry the aroma of a well used kitchen, as if the home cooked meals and chocolate chip cookies are still in the house somewhere, fresh out of the oven. You walk up the stairs and into one of the bedrooms. It feels so…familiar… You notice a picture frame on the dresser, and walk over to see who it is of. Your chest gets heavy, almost too full, as you realize that the picture is of you and your daddy. He has the most loving eyes…

I think we expect the kingdom of heaven to be new sometimes, as if we are discovering something no one else has ever discovered, as if the Kingdom is the last frontier. In a sense, it is. Yet, it’s the oldest thing in the universe. God’s reality predates time itself. What’s even stranger, and even more beautiful, is you have always been a part of it. Ephesians 1 says you were chosen before the foundation of the world. At the cross, Jesus fully reconciled you to Himself. He had you in mind that day he died. For thousands of years, you have been in the family, part of the story, mystically wrapped in the blanket of His eternal kingdom. You enter the kingdom for the first time, only to discover it was always yours.

I find this to be true in my life, like I’m remembering something I never knew before. You know it’s the first time you’ve ever touched the truth you’re encountering, but somehow it feels like remembering, like you’ve always known. My friend Doug said this to me a few weeks ago, and I didn’t know if I believed him, but the more I think about it, the more I realize he’s right. Not always, but often, when I’m spending time with God, and he shows me his heart, or his plans for me, or I read His word, it’s like I’ve been there before. It’s as if I’m reconnecting myself to the ancient dreams of heaven, the pre-existent realities that give meaning and something concrete to my very existence.

Mormons think we were spirit children in heaven before we were born, sent to earth on journey that ends in our return to our true family and our original home, heaven. I can see why they would think that. When you accept the gift of relationship with Jesus, when the work of the cross rewrites you into a new creation, you become one with Him. You are so intertwined with the preeminence of God that it almost feels like you were there when he breathed into Adam’s dust. You are one with the Vine of Love that always has been. See, God has always been in the kingdom. He IS the Kingdom. Now He is one with you. Now, the Kingdom is within you, and you are within it. Real Love isn’t just a new thing you get to experience; it’s the oldest thing that you always knew you were created for. The cross didn’t happen to some man named Jesus 2,000 years ago, it happened to your closest friend ten minutes ago, and you were there. Discovering the kingdom isn’t just finding new things, it’s unlocking eternal memories. It’s discovering who He was, is and will be. It’s discovering who you always were.

The process of becoming then, is also the process of remembering. Erasing the amnesia that was caused when we hit our head after the Fall.

I want to invite you to explore a scripture with me. Romans 5:12: “Wherefore as by one man sin entered into this world, and by sin death; and so death passed upon all men, in whom all have sinned.” In Adam, all have sinned. There are four different theological perspectives on this verse, and to get into them all would be superfluous, but let it suffice to say that you fell along with him. In the fall, Heaven became a dream, and barren earth became reality. Imputed amnesia was passed on to you, amnesia that caused you to forget who you really were made to be. Now, every human finds himself walking on that street, looking for the house of the Father, that holds all of the memories we have always hoped were true, but can’t actually remember.  But Jesus unlocked the house. He led you to the street. He’s the reason you opened the door. Jesus is the grand unlocker of the memories of the universe. He’s the grand unlocker of the secrets of your heart. His brightness burns away the haze, and His kindness melts away our defenses. He fills our whole bodies with light, and suddenly we see what was always true. Suddenly, we remember…

For more on reality, and what it really is, read this. (A Taste of Reality)

For more on Romans 5, read Karl Barth’s “Christ and Adam”

For more on our union with God, read this. (Union)

I’ve also started a page for recommended books, movies, etc. look in the upper right of this site to find that! 🙂

3 thoughts on “Remembering What You Never Knew”